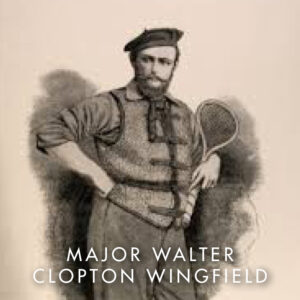 Major Walter Clopton Wingfield was a British army officer who was one of the pioneers of lawn tennis. He was inducted into the International Tennis Hall of Fame in 1997 as the founder of Modern Lawn Tennis. Wingfield was born on 16th October 1833 in Denbighshire, Wales. He attended Rossall between 1846 and 1850 and on leaving went on to train at Sandhurst.

In the late 1860s Wingfield was one of those experimenting with a lawn version of tennis. He patented a ‘new and improved court for playing the ancient game of tennis’ and began marketing his game in the spring of 1874, selling kits that included rubber balls imported from Germany. He adopted the racquets-based system of scoring where games consisted of 15 points (called ‘aces’). In the first year alone, he sold over 1000 sets including nets, balls and racquets.

In 1877 the All England Lawn Tennis and Croquet Club launched the Wimbledon Championship using this new style of tennis. An example of the original equipment for the sport and a bust of Wingfield himself can be seen at Wimbledon Lawn Tennis Museum.