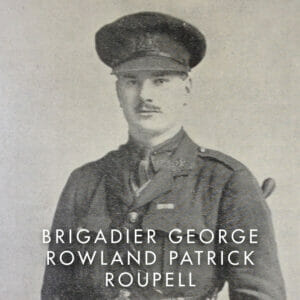 Old Rossallian, Brigadier George Rowland Patrick Roupell (Fleur-de-Lys 1907-10) was awarded the Victoria Cross for conspicuous gallantry and devotion. The Victoria Cross is the highest military decoration awarded for valour ‘in the face of the enemy’ to members of the armed forces of various Commonwealth countries, and previous British Empire territories.

George was 23 at the time. Besides the Victoria Cross, he was awarded the Croix de Guerre and the Order of St. George. He was a survivor of both World War One and Two, retiring from the army in 1946. He died on 5th March 1974 at the age of 82.