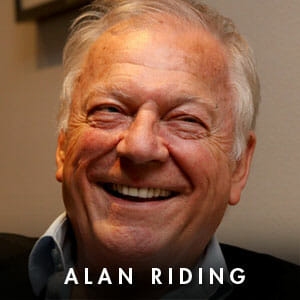 Alan Riding (SE 55-61) is an author and journalist. He was a long-time foreign correspondent for The New York Times, most recently as the paper’s European Cultural Correspondent based in Paris. He has also written a number of books, titles including Distant Neighbours, Essential Shakespeare Handbook and Eyewitness Companions. Alan was born in Brazil and came over to Rossall at the age of 11, before going on to Bristol University, initially studying law but then deciding to become a journalist

Alan’s career began with Reuters in New York, covering the United Nations. In 1971, he left Reuters and moved to Mexico to work as a freelance reporter, principally for The Financial Times, The Economist, and The New York Times

In 1989, after a brief stint in Rome, he was named The New York Times Paris Bureau Chief, which included coverage of the European Union and NATO. In 1995, he became the paper’s European Cultural Correspondent, a post that involved covering all the arts in the region. In 2007, Alan left journalism to write ‘And The Show Went On’, published by Knopf in 2010. It has also been published in Britain and has been translated into Spanish, Catalan, French, Polish and Portuguese.