Earlier this week, I read in the press that Philip Hammond and his treasury officials are considering imposing VAT (20%) on school fees. This is nothing new for in April 2017, Ross Clark produced a particularly vituperative piece for the Spectator entitled ‘VAT on fees? Our greedy private schools have it coming’. A few months earlier, former Education Secretary, Michael Gove, questioned current tax arrangements and criticised the system for ‘still considering the education of the children of plutocrats and oligarchs to be a charitable activity. Warming to his topic, he opined:

Private school fees are VAT_exempt. That tax advantage allows the wealthiest in this country, indeed the very wealthiest on the globe, to buy a prestige service that secures their children a permanent positional edge in society at an effective 20 percent discount.

Yes, these words come from the same Michael Gove who, in 2016, elected to send his eleven year old son to what has been described as ‘the Eton of comprehensives’ – Holland Park School in Kensington. Incidentally, in choosing this school, he passed over at least seven closer state schools.

It is difficult to escape the conclusion that, for all of his huffing and puffing, Michael Gove used his significant financial resources to secure an elite education for his son (paid for by UK taxpayers) which is certainly not routinely available to those living outside the Holland Park catchment area where average house prices (according to Zoopla) stand at a staggering £1,987,313. Yes, that’s right, a cool two million pounds. Where Michael Gove chooses to send his son to school is a matter for his personal conscience but he and, others who live within a woefully out of touch metropolitan bubble, are less willing to extend that principle to hard-working parents up and down the country who, more often than not, elect to forgo fancy clothes and sacrifice holidays in order to send their children to a school of their choice.

At the recent HMC Conference in Manchester, Shaun Fenton (Chair of HMC) addressed the issue of private school parents being unfairly criticised by virtue flagging friends and colleagues. He wrote:

No parent should have to apologise or be made to feel selfish when they are merely doing the best for their children by investing in their future……..Parents who are making good decisions on behalf of their children should be commended because that is what good parenting is supposed to be about. If the alternative is that you sacrifice the interests of your children’s education for some kind of political ideology or some kind of virtue flagging, that doesn’t seem to be authentic parenting.

Most importantly, Shaun Fenton highlighted the fact that, like all good schools, independent schools such as Rossall educate young people who are rich in moral purpose and imbued with a strong sense of social responsibility. I know that here at Rossall, our boys and girls leave us with a profound desire to ‘make the world a better place’. The grossly distortative characterisation of the independent schools as the ‘preserve of plutocrats’ is predicated upon a worryingly deep ignorance of the sheer diversity manifest within the sector. It is a lazy self-serving stereotype ill-suited to even the most elite institutions within the sector. Whilst there are independent schools in the South East which produce annual surpluses of eight million pounds or more, independent schools in areas such as the North West are fortunate to produce any sort of meaningful surplus. Day fees tend to be comparatively low (when compared with the South East) and schools such as Rossall do everything within their power to ensure that means-tested bursaries and scholarships enable as many young people as possible to access the outstanding quality of education that is provided here at Rossall.

Whilst others might critique from afar, we are committed (through our membership of the Boarding Schools Partnership) to providing vulnerable and disadvantaged children with the opportunity to receive the transformative benefits of an independent school education. We recognise our responsibility to the communities of which we are a constituent part, and we feel the most tremendous pride to serve the people of the Fylde Coast and beyond. We have the capacity to achieve a great deal of good in a part of the country which has been neglected by central government and blighted by the collapse of several key industries.

Seeking to punish or castigate parents who make extraordinary sacrifices in order to be able to send their children to private schools will only serve to make the sector evermore exclusive. It will weaken our ability to provide bursaries and scholarships to local children and it will add additional pressure to the state sector at a time when it is buckling under the cuts imposed by an austerity seeking government. Whatever cheap political capital were to be gained from such a move would soon be forgotten and the law of unforeseen consequences would manifest itself in the most pernicious and destructive of manners.

Parents at Rossall are hardworking individuals who love their children and elect to do everything within their power to ensure that their children benefit from the nurture, guidance and opportunities that being part of a socially inclusive and intellectually aspirant school community provides. They do not seek to buy privilege nor do they seek to judge others for the choices that they make in their lives. We should all be free to make those decisions which we believe to best serve the interests of our children.

Putting political arguments to one side, the facts speak for themselves – the sector makes an important contribution to the UK economy. Consequently whilst, imposing VAT on private school fees would provide the Exchequer with an additional £1.5 billion – this is a figure which would be dwarfed by the diminution or loss of the sector. 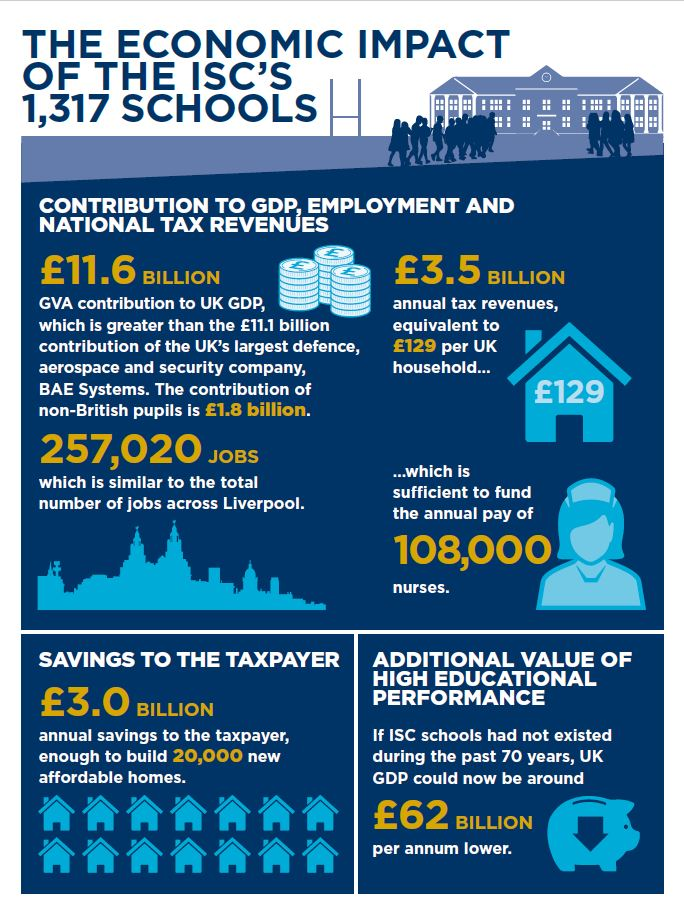 When it comes to education, I believe that all parents have the right to choose. As a School community, I believe that we have a moral responsibility to serve our locality and ensure that we do everything within our power to improve the life chances of those within our communities who are most vulnerable. We are in an extraordinarily privileged position insomuch as we possess the capacity to enable young people from a diversity of backgrounds to fulfill their potential in a warm, supportive and intellectually exciting environment. Rather than attacking the sector, I would urge politicians of every hue to work with us and help build creative and mutually beneficial partnerships that are radical, ambitious, and possess the potential to reshape the sometimes fractured educational landscape which blights the chances of so many children up and down the country. We are not the problem but we may very well be part of the solution.

The extraordinary benefits of working together for the sake of young people are reflected in the thousands of successful initiatives which, nationwide, have served to tighten bonds between the independent and maintained sectors. Let us never forget that we have a shared purpose and much to learn from each other as we endeavour to educate the next generation.

Wishing everyone a wonderfully relaxing half term break.