Whilst undertaking her A levels here at Rossall, Elisabeth was inspired by the CCF and decided that a career in the armed forces was for her. She passed the Regular Commissions Board and was awarded a bursary by the Royal Corps of Signals. She successfully completed a BA (Hons) Degree in Theatre and English before joining the Royal Military Academy Sandhurst where she was commissioned into the Royal Signals in 1998.

Elisabeth has enjoyed a varied and successful career, including operational tours in Northern Ireland and Iraq, working in the Army Headquarters and holding key appointments in Royal Signals units. Her most rewarding assignment was commanding an all-arms recruit training squadron at the Army Training Regiment in Winchester between 2012 – 2014; this included a junior entry intake of two hundred 16 – 17 yr old boys and girls. Last year, Elisabeth decided it was time for a change and resigned her regular commission, transferring to the Reserves. She is currently a Major working as a staff officer in Headquarters London District and is the Donor Liaison and Ambassador Coordinator for the national charity Tickets For Troops.

Elisabeth has recently set up her own children’s party business close to her home near Salisbury, where she lives with her husband and two daughters and she is also a magistrate on the Wiltshire Bench. 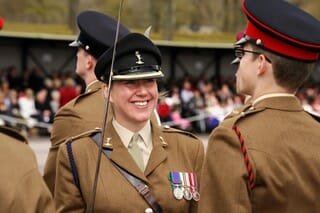