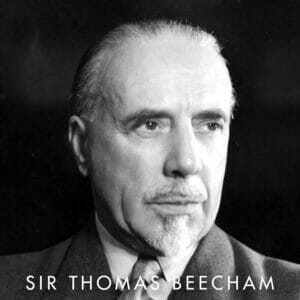 Born during this week in 1879, Sir Thomas Beecham (Fleur de Lys 1892-1897) was an English conductor and impresario, best known as founder of the London Philharmonic and the Royal Philharmonic orchestras. He was also closely associated with the Liverpool Philharmonic and Hallé orchestras. From the early 20th century until his death, Beecham was a major influence on the musical life of Britain and, according to the BBC, was Britain’s first international conductor.

Born to a rich industrial family, Beecham began his career as a conductor in 1899, after attending Wadham College, Oxford, to read classics. He did not find university life to his taste and successfully sought his father’s permission to leave university before studying composition privately. As a conductor, he was self-taught.

He returned to Rossall to perform on several occasions: with the Hallé Orchestra in 1918, with the Blackpool Symphony Orchestra in 1947 and with the BBC Northern Orchestra in 1949. To honour one of our most prolific alumni, the Sir Thomas Beecham Music School was opened at Rossall in 1959. Sir Thomas continued as a conductor until his death in 1961.