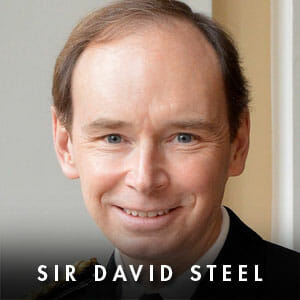 Vice Admiral Sir David Steel KBE,DL, held the highly esteemed position of Second Sea Lord in the Royal Navy until his recent retirement. After leaving Rossall , he attended Durham University where he read Law, graduating in 1983. He was called to the bar in 1988.

Sir David joined the Royal Navy in 1979 and his early career was spent in a variety of sea and shore appointments, including as the Fleet Legal Adviser. In December 1999, while serving in the aircraft carrier HMS Invincible, he was commended for valuable service in support of operations in Kosovo and Macedonia earlier that year.

In November 2005 he assumed command of HM Naval Base Portsmouth and in that capacity was honoured for his ‘inspirational leadership’ during the battle against government cuts in 2007. He was also appointed Chief Naval Logistics Officer and ADC to Her Majesty The Queen. In November 2008 he was appointed Director of Service Personnel Policy (Pay and Allowances) at the Ministry of Defence and, in April 2010, he was promoted to Rear Admiral and appointed Naval Secretary. He was promoted to Vice Admiral and appointed Second Sea Lord in October 2012.