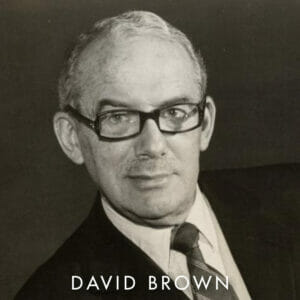 Sir David Brown achieved international celebrity in the 1950s as the owner of Aston Martin at the height of its success. The range of road going Aston Martins with his ‘DB’ initials became highly regarded as outstanding examples of the marque. He loved the glamour and excitement of cars and motor sports yet he was a shrewd business man (who even bought shares out of his pocket money in his school days at Rossall!).

After leaving Rossall, David Brown went on to study at Huddersfield Technical college. He then began working as a junior with the family’s gear production company and rose through the ranks until he became MD. He went on to produce the ‘David Brown Tractor’, an all British vehicle which was the star of the Royal Agricultural Show in 1939. Shortly after, he purchased the Aston Martin car business for £20,000. Both companies were sold in 1972. His cars are still revered by enthusiasts all over the world and will remain synonymous with the James Bond character created by Ian Fleming.