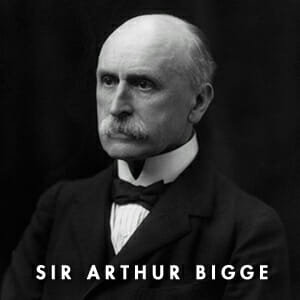 Sir Arthur Bigge (at Rossall 1860-67), First Baron Stamfordham, was a British soldier and courtier. He was Private Secretary to Queen Victoria during the last few years of her reign, and to George V during most of his reign. He was the maternal grandfather of Lord Adeane, Private Secretary to Elizabeth II from 1953 to 1972.

Bigge exerted considerable influence over King George,including advising the King to change the family name from Saxe-Coburg-Gotha to Windsor. Lord Stamfordham died, still in office, at St James’s Palace on 31 March 1931, aged 81,
He featured in a recent BBC2 Documentary’, ‘King George and Queen Mary; The Royals Who Rescued the Monarchy’, and is mentioned in the following link: