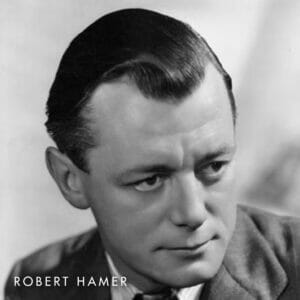 Robert Hamer (R 24-30) was a British film director and screenwriter. Whilst at Rossall, he won a scholarship to Corpus Christi College, Cambridge. He began his career in 1934 as a cutting room assistant and from 1935 worked as a film editor. The three Ealing films under his own name for which he is best remembered are Pink String and Sealing Wax, It Always Rains on Sunday and the black comedy Kind Hearts and Coronets (which was shown on BBC4 earlier this week). Not only was this film written and directed by him when he was only 38 years old, but it often features in Top Ten British films ever made. The film, made in 1949, features the legendary actors Sir Alec Guinness and Dennis Price.