Chairman of Governors, Chris Holt, and President of the Old Rossallians, Graeme Marrs, present wreaths in memory of the almost 300 old boys who fell during the First World War in the Memorial Chapel

“Have you news of my boy Jack?”
Not this tide.
“When d’you think that he’ll come back?”
Not with this wind blowing, and this tide.

“Has anyone else had word of him?”
Not this tide.
For what is sunk will hardly swim,
Not with this wind blowing, and this tide.

“Oh, dear, what comfort can I find?”
None this tide,
Nor any tide,
Except he did not shame his kind —
Not even with that wind blowing, and that tide.

Then hold your head up all the more,
This tide,
And every tide;
Because he was the son you bore,
And gave to that wind blowing and that tide!

You may well be familiar with the film My Boy Jack, which captures the agony of the Kipling family as they attempted to comprehend the devastating loss of their dear son John. The ebullient patriotism exhibited by Rudyard Kipling (an ardent imperialist) on the eve of the First World War placed him at the very heart of the establishment. He was something of a star turn at recruitment rallies. Eager to ensure that his son had the opportunity to ‘do his bit’ Kipling pulled strings, through the auspices of his friend Frederick Roberts, 1st Earl Roberts, a former Commander in Chief of the British Army, to ensure that John received a regular commission. Initially rejected on account of his severe short-sightedness, John was commissioned into the Irish Guards and subsequently declared missing in action at the Battle of Loos, in September 1915 . His body was not identified until 1992, and John’s death caused desperate recriminations between his parents who were both, understandably, driven to distraction by grief.

A hundred years on, it is difficult to comprehend the individual losses and collective tragedy wrought upon our own community here at Rossall. Armistice Day in Rossall passed by with little mention as the School was in the deadly grips of Spanish Influenza. One boy died in the Sanitorium and few were able to make it across the Square to Chapel – least of all Sergeant Shepherd, whose absence from his usual station at the door struck one observer as particularly ominous.

I was extraordinarily proud of our boys and girls this week. The contribution of readers, musicians and those within our CCF contingent (the oldest in the country) to our commemorative services was truly outstanding. To see the whole School community gathered round the Square, from Reception Class to Sixth Form, was particularly poignant and, a hundred years on, one still feels an almost visceral response to a loss which time does not entirely diminish.

We were delighted to welcome our new Bishop of Lancaster, the Rt Rev. Dr Jill Duff, to our service on Sunday morning and the strength of the bonds that bind us was reflected in the enormous number of Old Rossallians who joined us for the service. The Bishop unveiled new plaques to our to Victoria Cross holders, Brigadier George Rowland Patrick Roupell (1892-1974) and George S. Henderson (1893-1920). We are remarkably proud of all of our old boys who served with distinction but I should share with you the citations of our Victoria Cross holders. 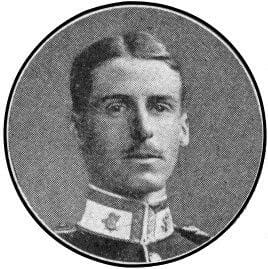 For most conspicuous gallantry and devotion to duty on 20 April 2015, when commanding a company of his battalion in a front trench on Hill 60 which was subjected to most severe bombardment throughout the day. Though wounded in several places, he remained at his post and led his company in repelling a strong German assault. During a lull in the bombardment he had his wounds hurriedly dressed, and then insisted in returning to his trench, which was again being subjected to severe bombardment. Towards evening, his company being dangerously weakened, he went back to his battalion headquarters, represented the situation to his commanding officer and brought up reinforcements, passing backwards and forwards over ground swept by heavy fire. With these reinforcements he held his position throughout the night, and until his battalion was relieved the next morning.
This young officer was one of the few survivors of his company, and showed a magnificent example of courage, devotion and tenacity, which undoubtedly inspired his men. 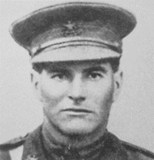 On the evening of the 24th July, 1920, when about fifteen miles from Hillah (Mesopotamia), the Company under his command was ordered to retire. After proceeding about 500 yards a large party of Arabs suddenly opened fire from the flank, causing the Company to split up and waver. Regardless of all danger, Capt. Henderson at once reorganised the Company, led them gallantly to the attack and drove off the enemy. On two further occasions this officer led his men to charge the Arabs with the bayonet and forced them to retire. At one time, when the situation was extremely critical and the troops and transport were getting out of hand, Capt. Henderson, by sheer pluck and coolness, steadied his command, prevented the Company from being cut up and saved the situation. During the second charge he fell wounded, but refused to leave his command, and just as the Company reached the trench they were making for he was again wounded. Realising that he could do no more, he asked one of his NCO.’s to hold him up on the embankment, saying, “I’m, done now, don’t let them beat you.” He died fighting.

In this week of commemoration, I was delighted to attend the CCF dinner in Common Room on Friday evening, not least because it provided a wonderful opportunity to thank our dedicated volunteers who demonstrate such unwavering commitment to the School and our boys and girls. The CCF provides invaluable opportunities for young people to develop confidence, resilience, self-discipline and leadership skills. We are tremendously fortunate to have a vibrant CCF and we are immeasurably grateful for the support provided by those who give so much to this aspect of School life.

Opening of the Performing Arts Studio

We were thrilled that David McKee crossed the Atlantic to join us for the opening of our Performing Arts Studio. David is an Old Rossallian who has enjoyed a highly successful career in the artworld. For 41 years, David and his wife Renee operated an art gallery at 745, 5th Avenue in Manhattan. He represented many famous artists including Vija Celmins and Philip Guston. David’s decision to fund the development of the Performing Arts Studio was extraordinarily generous and it means that we now have an outstanding facility for our dance and drama students. This wonderful gift has come at a particularly opportune time given the appointment of our new Director of Performing Arts. We are tremendously grateful to David McKee and his speech was utterly inspirational. We now owe it to David to ensure that Performing Arts at Rossall continues to go from strength to strength.

Our pupils have been busy this week and their performances in the newly completed Performing Arts Studio were complemented by the outstanding work that our Year 9 pupils completed in their art lessons having been inspired by war artists such as Paul Nash.

Wren House were worthy winners of House Music and we all enjoyed the trip to the Grand Theatre in Blackpool. At the end of last week, the manager of Fleetwood Town, Joey Barton, visited Rossall as part of our guest speaker series. Joey was remarkably honest about the mistakes that he has made and he reflected very carefully upon the subsequent steps that he has taken to address troubling aspects of his own behaviour. He also emphasised the importance of self-belief and explored the ideas of Matthew Syed with regards to purposeful practice and marginal gains. Matthew Syed’s work on intrinsic motivation and the power of practice is extremely readable. He challenges the notion that intelligence is innate or fixed and explores the role of environmental context, self-discipline and psychological factors. It is well worth encouraging teenage sons or daughters to read Bounce not least because it may well speak to them in a way that is powerful and ccessible. 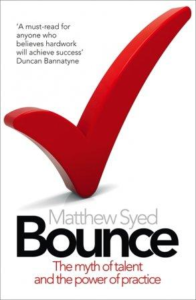 Younger children (Aged 10 and above) may like to read You Are Awesome. It has received excellent reviews from children who believe that it has helped inspire them to have the courage to try new activities and grow in confidence. 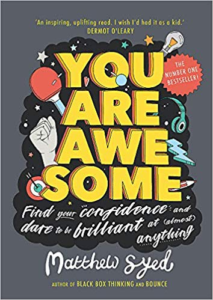 Finally, why not consider letting your children see you attempt something new or something that places you slightly beyond your comfort zone? This week, I followed Connie Lupton’s lead by playing the organ in Chapel for the first time. Whilst my playing was not a patch on the wonderful performances that Mr Watson, Connie and Zac Crowe gave on Saturday afternoon, I felt a real sense of accomplishment because I had tried something new and something which, in the first instance, made me feel anxious. If we want our sons and daughters to tackle new challenges with a fearless spirit then I think that we need to sometimes take the lead.

Have a super weekend!