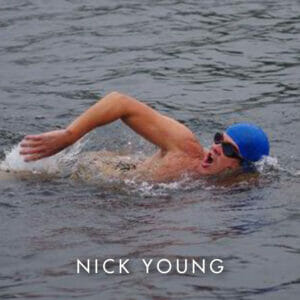 We are immensely proud of former pupil Nick Young (Pelican House, 1982 – 1989) who has raised an amazing £80,000 by swimming the English Channel in support of his niece, who was paralysed after a playground accident. Nick, who now lives near Clitheroe, had only ever swum a few lengths before taking on the swim, which involved over 18 months training.

Nick took up the Cross Channel challenge after learning that 12-year-old Bel needed a hydrotherapy pool to help with her weekly physiotherapy routine. Bel, the daughter of Nick’s brother Simon, who was also a pupil at Rossall, was paralysed from the neck down after falling from a climbing frame four years ago. She is now confined to a wheelchair and relies for much of the time on a ventilator to breathe. Although Bel had been receiving regular aquatic therapy, her nearest pool was more than 45 minutes away, so Nick decided to help raise the £50,000 needed to build one at her home in Harrogate.

“I’m not really a swimmer at all. I’ve only ever been to the pool to swim a few lengths on a Sunday morning, so this really was out of my comfort zone!”

Nick prepared himself for the challenge by swimming the length of the Channel on a weekly basis at his local pool before heading outside in May to test his stamina at Coniston Water and Lake Windermere in the Lake District. He also completed a nine and a half hour swim along the Channel coast to acclimatise himself to sea conditions.

On the big day Nick was accompanied by a team including his brother Simon and wife Jo, with Bel tracking his progress online. Nick made the crossing in 13 hours and 51 minutes, helped out by some energy boosting snacks which reminded him of his school days.

“I wasn’t allowed out of the water and had all my meals passed out to me as I trod water alongside the boat. One of the things which really kept me going was hot rice pudding – it was just like being back in the Dinner Hall at Rossall after a cold afternoon on the beach!”

Nick visited Rossall to talk to pupils about his cross-Channel experiences early in 2015.