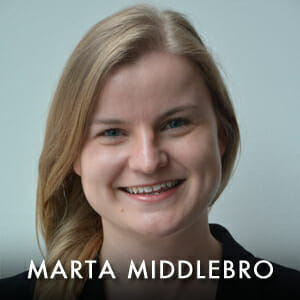 Marta Middlebro’ attended Rossall’s Sixth Form from 2000 to 2002 and was a member of Rose House. After her studies, Marta was awarded a place at Oxford University, where she read Philosophy, Politics and Economics, before completing her postgraduate degree in European Politics. Marta currently works for the European Commission in the International Trade Department and is responsible for EU trade relations with China.

When were you at Rossall?

I was in the Rossall Sixth Form from 2000 to 2002. I originally came for one year under the HMC Central and European Scholarship Scheme and was then able to stay on for another year and take my A Levels with the very generous help of Rossall and of the Trapnell Scholarship.

What are some of your favourite memories of your time at the school?

I had a fantastic time boarding and really enjoyed the close community and friendship at Rose House. Here I would like to give a big shout out to Mrs Lee who was my Housemistress back then and who still teaches and is now Head of Junior School at Rossall – she was always very encouraging and took me under her wing throughout my time at Rossall. I did a lot of music – I was in the Chapel Choir and in the Orchestra – and some of the performances or just simply playing music with my friends are some of the best memories.

What was it like to be a Czech student studying in the UK at that time?

There is no tradition of boarding schools in the Czech Republic, so I had no idea what to expect. It was a steep learning curve for me, as I went through the adjustment of going from studying English as a foreign language to studying other subjects in English. Cultural exchange is one of the objectives of the HMC Scheme, so I was keen to tell them about the Czech Republic and in my second year I helped organise a choir tour in Prague.

What did you study at university?

I gained a place at Oxford to read Philosophy, Politics and Economics and went up in the autumn of 2002. I then stayed on at Oxford to take a postgraduate degree in European Politics.

What is your career now?

I currently live in Brussels and work for the European Commission as a civil servant. I work in the International Trade Department and I am part of the team responsible for EU trade relations with China. My job involves international trade negotiations, economic analysis and policy development. Within the European Commission, I had previously focused on relations with Sub-Saharan Africa and on making international trade work for developing countries. I first came to Brussels as a diplomat with the Czech Foreign Office.

What difference did coming to Rossall make to your education and to your career?

This is a total cliché but the experience has changed my life – there is no other way of putting it. Oxford has opened a lot of doors for me and I cannot imagine getting in without the excellent teaching I got at Rossall. It really made me flourish intellectually and sparked my interest in academic study and research.

What’s the best part of your job?

The variety of issues that I deal with, and in particular working with so many different people and constituencies – a job in trade policy means that I get to be in daily contact with diplomats, parliamentarians, business representatives, civil society groups etc.

How do you feel your education at Rossall prepared you for the role?

My teachers at Rossall encouraged independent thought. This is what I appreciated the most about my UK school experience: being asked to analyse, to think critically, to argue for one’s position. I think these are skills that stand you in good stead in any job.

What would you say to any student considering coming to the UK (and to Rossall) to study?

How would you sum up your time at Rossall in one word?