The trip began with lots of travelling. After we finally arrived at our hostel, we enjoyed a local orientation of Malasaña and tried ‘horchata’, a sweet drink made of nuts, water and sugar. We then went to the world famous Hard Rock Café, where we saw some very famous items from musical history such as an outfit worn by Madonna, boots worn by Fergie, and my personal favourite, a guitar previously owned and signed by Slash from Guns n’ Roses.

The next day, we saw many sights. We went to The Church and Convent of Las Trinitarias Descalzas, where Cervantes is supposedly buried. We also saw the house where Cervantes lived, after which we encountered an area with lots of quotes taken from Spanish literature. We saw several statues, a particular one was that of a bear and a strawberry tree, which I later discovered to be the symbol of Madrid. This is located in ‘Puerta del Sol’, where people go on New Year’s Eve. In Spain, the tradition is to eat a grape at each chime of the clock, counting down to midnight.

After we had explored some of the shops in that area, we moved on to eat ‘churros y chocolate’ at the infamous ‘Chocolatería San Ginés’ that has been running since 1894. ‘Churros’ are a Spanish snack consisting of a strip of fried dough and dusted with sugar or cinnamon. They were delicious, particularly when we dunked them into thick, hot chocolate! We next experienced a gourmet tapas market where we tried a variation of classic Spanish tapas dishes and drinks. We also saw the oldest restaurant in the world, ‘el Botín’, where Goya is said to have worked before he became famous for his artwork! 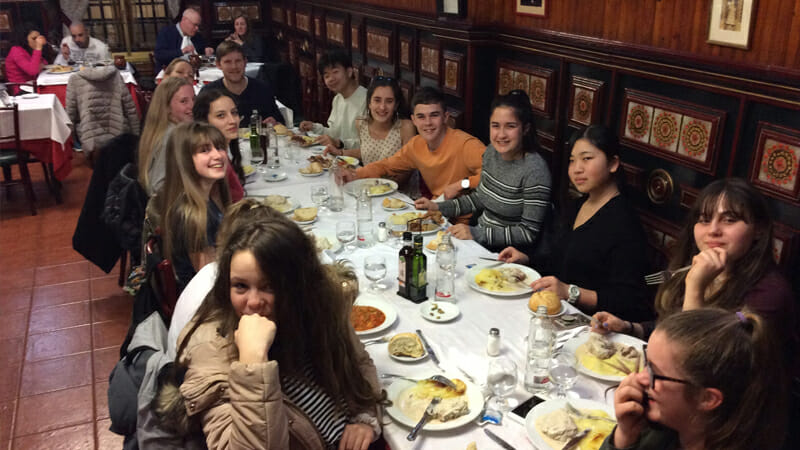 We carried on our insightful tour of the city, stopping at Madrid’s beautiful Almudena Cathedral located in Hapsburg in Madrid and The Royal Palace. We then arrived at ‘Faro de Moncloa’, where we travelled 92 meters up in a glass elevator to the top, to meet a breath-taking bird’s-eye view of the city and beyond. After enjoying the view, we went to see a Disney movie in Spanish called ‘Un Pliegue en el Tiempo’ (A Wrinkle in Time). Although they were speaking quite fast, I still really enjoyed the movie and was able to make out parts of it. Finally, we went for a delicious meal at a traditional Spanish restaurant dating back to the 19th century. The servers spoke in Spanish to us and at first I felt shy but later I found myself speaking in Spanish more often.

Saturday was another busy but fun day, which started with lots of shopping on Calle de Fuencarral and Gran Vía. We also went to El Museo del Prado which features paintings made by the likes of Luis López Piquer and Goya. My favourite artist was Piquer because, his use of different textures, impressed me. All of this was then followed by some more tapas and a cooking class where we learned how to make a ‘pan con tomate y jamón’ (a starter of bread with a tomato, oil and garlic dressing and Iberian ham on top), chicken and seafood paella and ‘crema catalana’ (a dessert akin to crème brûlée). I found the class to be a wonderful experience and I learnt lots of useful skills, such as how to chop garlic properly. I was pleased with the end result that I achieved with my cooking partner. 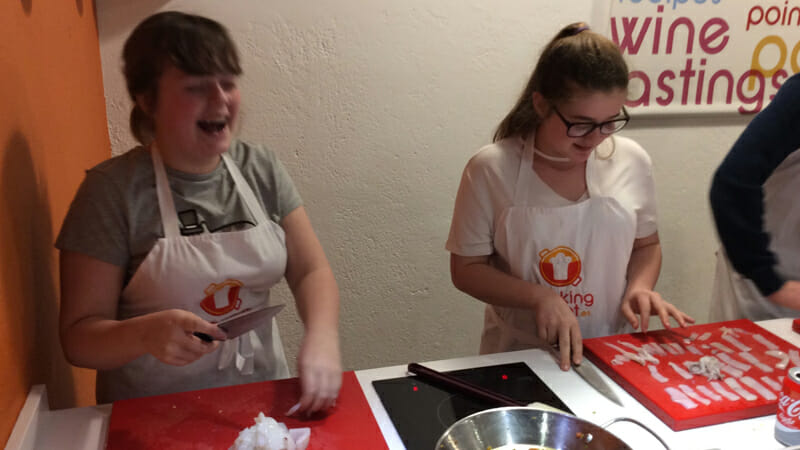 Sunday was sadly the last day we spent in Madrid. We visited the popular Rastro Market, where people were selling different items such as shirts, traditional Spanish wares and posters. This was followed by a visit to ‘Museo Nacional Centro de Arte Reina Sofia’ where we saw the Guernica, which was painted by Pablo Picasso. The image really captures the horrors of Guernica and the sadness of the situation at that time. The museum also included works by Dalí and Goya. We then enjoyed tapas one last time, and moved on to the beautiful Retiro Park where an art exhibition was being held in the Crystal Palace featured in the Park. As we moved further into the park, we saw many large statues, which were the focus point for the big lake in the northern part of the park. The sun was out and we enjoyed an ice-cream, as we strolled along, but unfortunately, before we knew it, it was time for us to quickly get our bags and start our journey home.

The trip to Madrid was better than I expected. I recommend going to Madrid because there is so much to learn and I found that practising Spanish in real-life situations was a great way to improve. The best experience I got from the trip was interacting with the locals in Spanish as I feel this made me more confident.