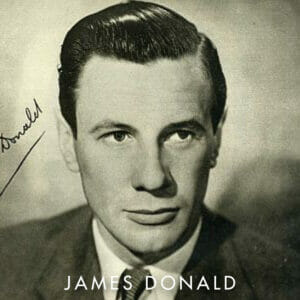 James Donald was a Scottish actor who attended Rossall School along with his three elder brothers. He made his first professional stage appearance in the late 1930s and had minor roles in a number of films until he played Theo Van Gogh in Lust for Life (1956). His work in the theatre included Noel Coward’s Present Laughter in 1943 (which also starred Coward himself). He memorably portrayed Major Clipton in the blockbuster classic film The Bridge on The River Kwai (1957); he also played another memorable military character, Group Captain Ramsey, the Senior British Officer in The Great Escape (1963).