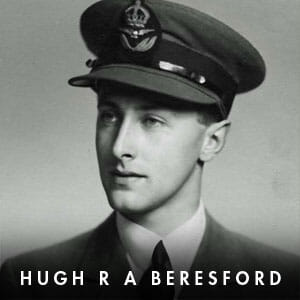 Known by the family as ‘Tom’, he came from Hoby in Leicestershire where his father was the Rector.  He was a fine cricketer, playing in the 1st XI for four seasons and captaining it in his final year.  After Rossall, he took a commission in the RAF and when war started flew Spitfires and Hurricanes.  On September 7th 1940, towards the height of the Battle of Britain, he led his flight from 257 Squadron from its Suffolk airfield for the fourth time that day in order to intercept a German bomber attack on London.  His flight was attacked by an overhead fighter escort and his Hurricane was seen to fall away and enter a steep dive.  The aircraft thudded into soft ground at Spit End Point in the Thames Estuary.

Fast forward 39 years now to 1979 when his plane was discovered and recovered in the presence of a BBC Documentary Film Crew.  The serial numbers on the fuselage connected the crash with the identity of the pilot, the remains of whose body was still in the cockpit.

On 16th November 1979 Flt. Lt Hugh Beresford was buried with full military honours in Brookwood Military Cemetery, Surrey.  He was just 24 when he lost his life.