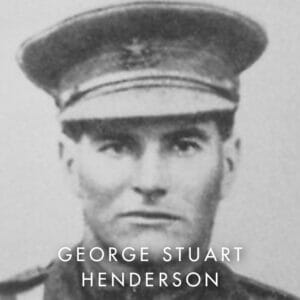 George Stuart Henderson (Rose 04-12) was the School’s other recipient of the Victoria Cross, the highest military decoration awarded for valour.

He was a keen sportstman, representing his house in cricket, rugby, hockey, fives and football. He was also a member of the CCF, quickly promoted through the ranks to Corporal. He went on to RMC Sandhurst in 1912 to complete his military training. His young life was cut short when, under attack near Hillah (in Iraq), he gallantly led his company to drive off the enemy before falling wounded.

He refused to leave his command and on realising that he could do no more, he asked one of his NCOs to hold him up on the embankment saying, “I’m done now, don’t let them beat you.” He died fighting.