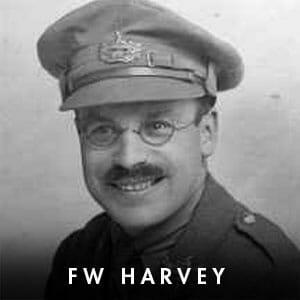 Frederick William Harvey DCM, often known as Will Harvey, and dubbed ‘the Laureate of Gloucestershire’ was an English poet, broadcaster and solicitor whose poetry became popular during and after World War I.
In 1914, Harvey joined the 5th battalion of the Gloucestershire Regiment as a private. His battalion was posted to France in March 1915, where he was promoted to lance corporal and awarded the Distinguished Conduct Medal (DCM).

He returned to England for officer training but after being commissioned and returning to France, he was captured on 17 August 1916 in the German front-line trench while carrying out a reconnaissance patrol. He spent the remainder of the war in prisoner of war camps.

Soon after his arrival in France, Harvey had begun to contribute to a trench newspaper, the Fifth Gloucester Gazette. His first volume of poems, A Gloucestershire Lad At Home and Abroad, was published in September 1916, shortly after his capture. He began to write more intensively in captivity, and poems were sent back to England for publication. His second collection, Gloucestershire Friends, appeared in 1917. His time in the camps is held to be his most productive period of writing. On returning from a spell of solitary confinement at Holzminden after a failed escape attempt, he saw that a fellow prisoner had drawn a picture over his bed in chalk of ducks in a pool of water. This inspired his most celebrated poem (and the title poem of his third collection, published in 1919), ‘Ducks’.