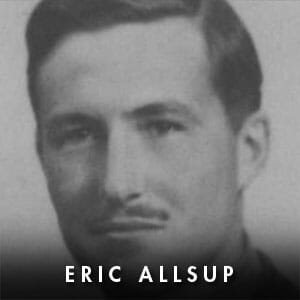 After leaving Rossall, Eric went on to Cambridge and read French and German at Magdalene College for two years until his time there was interrupted by the war.

Having only been promoted to Acting Captain in the Royal Tank Regiment two days before, his squadron were under attack on the Urbani Ridge near Rimini, Italy. The Squadron Commander and Second in Command were both wounded, so Eric was swiftly made up to Major and rallied the tanks and successfully attacked the enemy in the face of gun and mortar fire. He skilfully led the remaining tanks and, as a result of his inspiring leadership and determination, was largely responsible for the capture of the Urbani Ridge. For this he was awarded the MC.

When asked about his MC, he replied that he hadn’t done anything particular to earn it; often typical of those who earn such awards. His name was misspelt in a reference to his tank experience in a book called ‘Tank Men’. Eric said that of all things to remember, the first names of his tank crew he would never forget.

Eric has recently died aged 96, his obituary was included in the Telegraph earlier
in the week.