On Friday 26th January, nineteen Sixth Form Design students accompanied by Miss Hall, Mr Hodgetts and Mr Travis left Rossall School for Basel. Departing from Manchester airport and arriving at Basel Mulhouse Freiburg europort we headed via taxi to our hotel in Weil Am Rhein Germany, staying on the banks of the river Rhine, a stone’s throw from both France on the other side of the river, and Switzerland behind us.

An early start was needed on Saturday morning and the group were walking over the bridge to France. We arrived at Saint Louis train station to catch our train to Mulhouse. After a quick transfer to the tram in Mulhouse we arrived at Cité de l’Automobile, which is home to the world’s largest automobile collection. The main area used to display the collection is a huge 17,000 m² hall, lit by eight hundred lamp posts identical to those on the Alexandre III Bridge in Paris. Within this hall there are two hundred and forty three vehicles ranging from 1878 through to the present day. After taking in the amazing diversity of these early vehicles we progressed through to the Masterpieces area. This area displays eighty of the most beautiful cars from the 1930s, high prestige cars, such as the Panhard-Levassor X26, the Delahaye 1935 from 1949 and the Rolls-Royce Silver Ghost from 1924. The central display features the famous Bugatti Royales, including the Bugatti Royale Type 41 and the 1930 Coupe Napoleon which belonged to Ettore Bugatti himself. 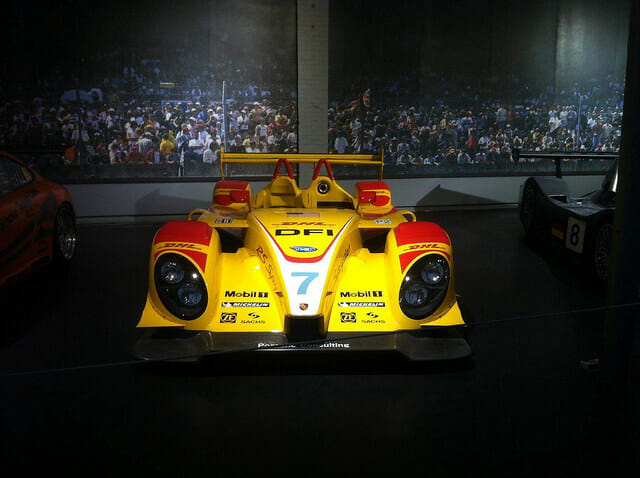 The collection also houses a range of famous racing models, such as a Mercedes W125 from 1937, a Maserati 250F from 1957 and a Lotus type 33 from 1963, alongside the famous Bugatti type 32 from 1923, with its revolutionary aerodynamics. This brought us through to the present day and the Bugatti Veyron. After watching a five-minute film produced by the Bugatti Company we were able to see it displayed on a turning plinth with the large screens behind showing its exceptional technical capabilities.

After breaking for a late lunch in La Piste café we made our way back to our hotel, the students then had some free time before taking our evening meal at a Restaurant on the banks of the Rhine looking across to France.

Day two saw a slightly later start. After breakfast at the hotel we made our way to the Vitra factory, Design Museum, and Schaudepot exhibition space. We began our visit with an architectural tour of the campus taking in some of the key buildings on the site, this unique architectural ensemble includes structures by Tadao Ando, Richard Buckminster Fuller, Frank Gehry, Nicholas Grimshaw, Zaha Hadid, Herzog & de Meuron, SANAA, Álvaro Siza and others. Many of these architects are winners of the Pritzker prize, which is often referred to as the Nobel Prize of architecture.

The first building that we visited was the Factory building, designed by the Japanese architectural office SANAA. The building has a freehand drawn roughly circular shape, with the flowing character of the building’s exterior being created by a white curtain façade made of undulating acrylic panels giving it a light, almost floating appearance. Our students were asked by our guide how they thought the panels were attached, the reply, they are curtains, obviously you hang them.

Second on our list was the Conference Pavilion by Tadao Ando, this was the architect’s first work outside Japan. The centrepiece of the building consists of a sunken courtyard that appears to conceal the surrounding environment. From here a series of narrow, carefully proportioned corridors and ramps leads to an assortment of conference rooms. The beautifully finished exposed concrete and wood surfaces reinforce the atmosphere of calm and concentration that was the architect’s intention. 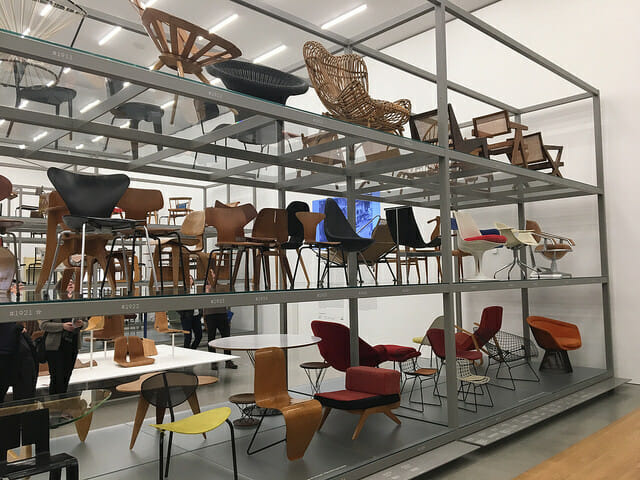 This proved to be a very inspiring building for some of our Pre-U Architecture and Product Design students, with one in particular having a moment of enlightenment, where he turned to me and said “Sir, I get it!” in reference to what the architect was trying to achieve. Moments like these make our visit so worthwhile.

Other highlights of our architectural tour were the Design Museum building designed by the American architect Frank Gehry as his first project in Europe. This building serves as a space for a wide range of exhibitions over the year. On our visit this was the base for the Charles and Ray Eames exhibit.

Charles and Ray Eames, the husband and wife design team are noted as being among of the most important designers of the 20th century. Their furniture designs have become world famous having influenced generations of designers and they continue to shape our everyday culture. Their work is closely associated with the exuberant start-up culture on the American west coast during the post-war era, and this exhibition allowing the Rossall students to get close up first-hand experience of the way in which they designed their products. The displays showed the vast amount of experimentation that the Eames undertook with contemporary materials and manufacturing techniques.

Our Architectural tour was completed by a visit to arguably one of the most recognisable buildings on the campus, Zaha Hadid’s Fire Station building. The design of the Fire Station was carried out by London-based Iraqi architect Zaha Hadid. She created a building housing a garage for fire engines along with another wing containing locker rooms, showers and common areas.

“The Vitra Fire Station was the first full-scale work by Zaha Hadid ever to be realised and is regarded today – along with Frank Gehry’s building for the Vitra Design Museum – as a key work of so-called Deconstructivism and of late twentieth-century architecture in general.” (www.design-museum.de)

Before taking a break for lunch we spent some time admiring the views from the top of the 30.7-metre-high Vitra Slide Tower. Designed by the German artist Carsten Höller, it is a viewing tower, slide and art installation in one.

The remainder of our day was spent on a guided tour of the extensive collection of furniture and design work housed in the Schaudepot, designed by Basel based architects Herzog & de Meuron.
This building contains the permanent collection of the Vitra Design Museum with a total of around 20,000 objects, 7000 pieces of furniture covering design from 1800 to present. A second focal point is the lighting collection, which contains more than 1000 objects by such designers as Gino Sarfatti, Achille Castiglioni, Serge Mouille or Ingo Maurer.
The central focus is the main hall where a selection of more than 400 key pieces of furniture design, including rare works by such designers as Gerrit Rietveld, Alvar Aalto, Charles & Ray Eames and Ettore Sottsass are housed.

This left us with a little time to unwind and explore the campus before heading back to the airport, with a visit to the Vitra Haus shop being a popular stop for many of the students. 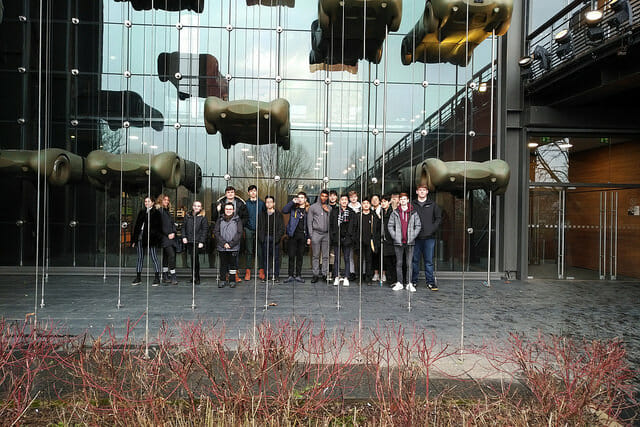 After arriving at the airport to find our flight delayed by 50 minutes it gave the student’s time to reflect back on their experiences of the weekend, favourite buildings, architects and designers were discussed and debates ensued in some areas of the airport lounge, until tiredness started to sink in. A very tired group of students and their teachers returned to Rossall School at around 2am on Monday, with the unfortunate knowledge that we would all be up and in lessons in around six hours’ time.
This is the third year that students from Rossall Design and Technology department have ventured upon this journey of discovery. There is always something new to see, something else to provide inspiration for their own work, and a chance to develop a deeper understanding of the path that they are travelling. I would like to take one last opportunity to thank my colleagues Miss Hall and Mr Travis for all the hard work that they put into both helping to organise this visit, and making it a success, and to the students who took the time to listen, observe and seek a greater understanding.