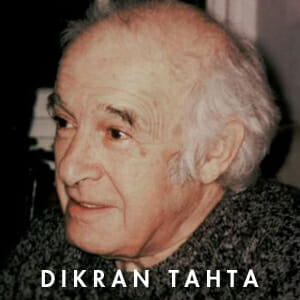 Dikran (Dick) Tahta was one of the outstanding Mathematics teachers of his generation. In a national advertising campaign to attract recruits to the profession, the theoretical physicist, Stephen Hawking was among famous people asked to name one teacher who had inspired them: “Mr Tahta,” was Hawking’s response.

Dikran was born in Manchester, where his Armenian parents set up home after the first world war. On leaving Rossall, he gained a scholarship to Christ Church, Oxford, in 1946. Mathematics was his main subject, but he read widely and intensively – English Literature, Philosophy and History – at a formidable speed. A book a day was his norm for 60 years.

In 1954 he was invited back to Rossall school to teach English and History. Gradually a few Mathematics lessons were introduced, and Dick found he enjoyed teaching them. He then took up the subject in earnest, moving the next year to St Albans school, Hertfordshire, where Hawking was a pupil.

His reputation brought him the post of lecturer in Mathematics education at Exeter University in 1961, and there he built up a wonderful network of students and teachers in West Country schools. A magical teacher, he enjoyed the lively interaction of the classroom.

He was a leading member of the Association of Teachers of Mathematics (ATM), which in the 1960s wrote the influential books Some Lessons in Mathematics, Notes on Mathematics in Primary Schools and Mathematical Reflections. He also founded and edited the ATM journal Recognitions.

Throughout the 1970s he gave much energy to Leapfrogs, a group of mathematics educators who produced a range of innovative teaching materials and went on to make a ground-breaking educational TV Mathematics series – first called Leapfrogs; later Junior Maths – which ran for 12 years. Dikran died in 2006, aged 78.