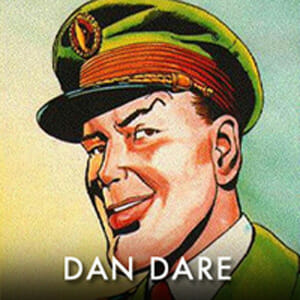 AMAZING ALUMNI – DAN DARE
Daniel Dare was born in Manchester, son of William and Jean Dare. His hobbies include cricket, fencing, riding, painting and model making. He is a qualified Space Pilot Class 1.

At the age of 12, Dan came to Rossall School, where he was a rather high-spirited pupil. He did, however, calm down and eventually became School Captain. He then went on to Trinity College, Cambridge, where he read Modern Science. Under an international exchange, he entered Harvard University (in the USA) where he undertook research in astrophysics.

On leaving university, he joined the Interplanet Spacefleet as a cadet. He served his time on the Moon run, then completed his long-distance training as a co-pilot on the Mars run. He was promoted to Captain – Space Pilot Class One, and later to Colonel. He was eventually appointed Chief Pilot and in that capacity undertook his many perilous missions.

Dan was awarded the ‘Order of the United Nations’ for leadership of the Venus Expedition in 1996 and granted full citizen rights of the planet. He is a natural leader and is a man who inspires those around him to give of their best. His word is his bond. A true Rossallian!

(The character ‘Dan Dare’ appeared in The Eagle comic between 1950 and 1969.The Eagle is the most successful comic in the history of publishing in Europe. There is a bust of Dan on Lord St in Southport,where his creator, Frank Hampson, was educated).