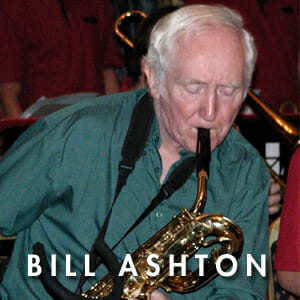 Bill Ashton is a British saxophonist and composer, best known for co-founding the London Schools’ Orchestra, now known as the National Youth Jazz Orchestra (NYJO), of which he is Musical Director.

On leaving Rossall, he undertook his National Service before going to Oxford University in 1957, where he first began playing jazz professionally at functions and competitions, founding the Oxford University Big Band. On leaving university in 1960, he went to France and worked as a professional musician in the American army bases for just under a year. Returning to London, he did supply teaching, mostly French, and started to join various blues bands. He then founded what became the NYJO in 1965, which celebrated its 50th Anniversary in 2015. It is one of Britain’s longest-running ensembles for young people under 25 playing big-band jazz. NYJO features 23 musicians and vocalists from around the country, most of who go on to become professional musicians. NYJO alumni include Guy Barker, Mark Nightingale, Gerard Presencer, Pete Long, Dennis and Winston Rollins and Amy Winehouse.