A roaring good time was had by all who attended Rossall Infant and Junior School’s annual drama production, The Lion King Jr. One of the West End’s stand-out shows, The Lion King seemed sure to be an ambitious challenge. The cast, of pupils aged six to eleven, appeared unfazed by the enormity of the task ahead as they took to the stage for two sold out performances.

The pupils performed all the well-known Lion King songs such as Circle of Life, complete with Zulu lyrics. The group performances, from cast and chorus, set the atmosphere for the show perfectly.

The first act saw Junior School Captain Emerson Porter (age 11) lead the cast as Mufasa, with fellow Year 6 pupil, Oscar Mistry as his young lion cub son, Simba. Oscar brought an enthusiasm to the role, which beautifully opposed the sneering cruelty of his uncle, Scar. 11-year-old Henry Singleton shone as Scar, capturing the deception and cruelty of his character and instilling the needed fear that surrounds the lion. 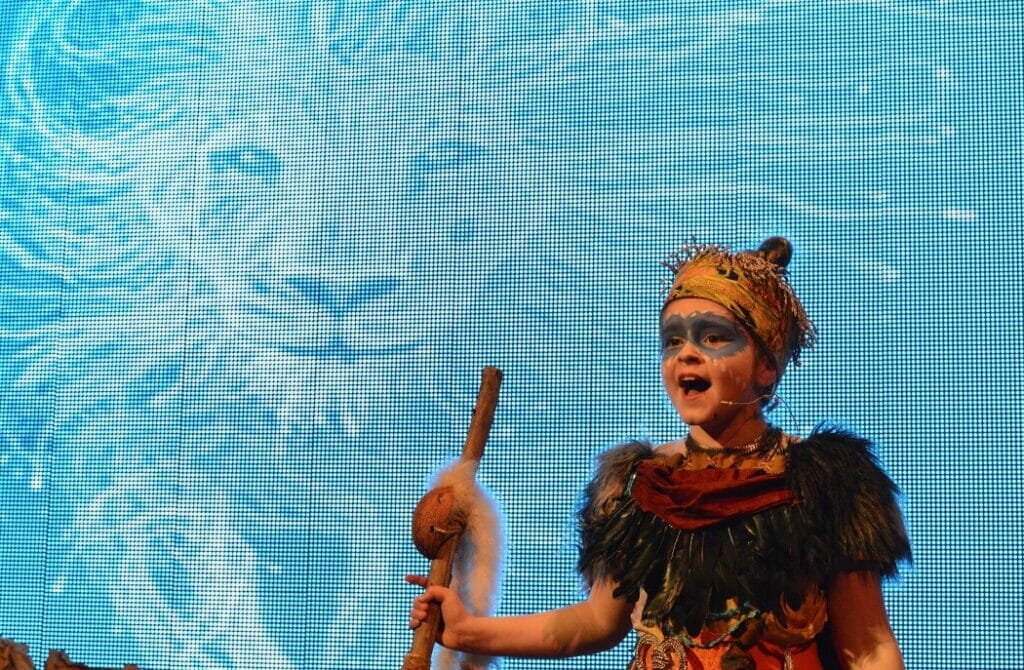 Steffan van Blerk (age 11) took over the mantle of Simba in the second act, with Rosie Lupton (age 9) and Daniel Eaves (age 11) by his side as the lion’s unlikely friends Timon and Pumbaa. The pair mastered the comedic timings of their duo to deliver the light relief the Lion King needs surrounding its emotional story.

Grace Brindle, who is only 10 years old, delivered an inspiring performance as the mandrill shaman, Rafiki. Grace subtly portrayed the mystical energy and all-knowing ways of Rafiki with an ease telling of her talent.

Thanks to kind donations from KRS Rigging Services, and Indivisual Media Group the Infant and Junior School production included an impressive digital backdrop, allowing the cast to fully immerse themselves in the Pride Rock setting.
Rossall School teachers, pupils and parents excelled themselves with impressive set and costume design, the lion headdresses, in particular, made a lasting impression on the audience.

Directed by drama teacher Seren Mistry, The Lion King Jr is notably one of the most impressive productions the Infant and Junior School has staged.
Rossall has seen many budding stage talents nurtured at the school, and it seems possible that The Lion King Jr showcased some of tomorrow’s bright young stars.

Of the production Rossall’s Nursery, Infant and Junior Headmistress, Mrs Katie Lee, said: “Rossall Junior School were amazing, the acting and singing fantastic. Congratulations to Mrs Seren Mistry (producer), the teachers and all the parent helpers who made tonight a tremendous success.”