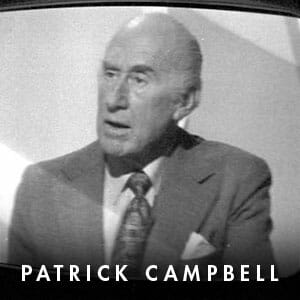 He was taken on by The Irish Times before WW2, during which he served as a Chief Petty Officer in the Irish Marine Service. After the war, he re-joined the newspaper and was given charge of the column, ‘Irishman’s Diary’. He had a weekly column for the Irish edition of the Sunday Dispatch, before working on the paper in London from 1947 to 1949. A number of his books were produced, containing collections of his more humorous pieces that were originally published in newspapers and magazines.

Patrick delighted television audiences with his wit, notably as a regular team captain on the long-running show Call My Bluff, opposite his longtime friend, Frank Muir. He also made regular appearances in That Was The Week That Was. He lived for many years in the South of France, and died in Cannes in 1980.

× Live Chat Available from 09:00 to 22:00 Available on SundayMondayTuesdayWednesdayThursdayFridaySaturday
We use cookies to ensure that we give you the best experience on our website. If you continue to use this site we will assume that you are happy with it.OkNo