On Friday 20 October 41 pupils and 6 members of Common Room set off on Rossall School’s biennial educational visit to the First World War battlefields of the Western Front. The pupils’ ages ranged from 12 to 15. There was a great deal of travelling involved and there was a considerable amount to be seen. The first step was the overnight ferry, this in itself was something of an adventure, but it proved to be a calm crossing. Notwithstanding the high spirits of our younger travellers!

When we boarded our coach we headed straight for Ypres to rendezvous with our guide Simon. When we reached the town, which had to be totally rebuilt brick by brick after the Great War, we drove under the Menin Gate. This is a significant monument built by the British as a ‘memorial to the missing’. It was imposing and could not fail to leave an impression. We would return in the evening to take part in the Last Post Ceremony.

Having met up with our guide a quick lunch was followed by a visit to the Flanders Field Museum. It set the tone for the rest of the day. Our guide was exceptionally knowledgeable and he provided us all with considered explanations and measured detail regarding the sites that we visited and those that we simply drove past because time was short. We did not get to see the Sanctuary Wood Museum but the German trenches at Bayernwald were impressive. They are a small fraction of what remains of a site that saw fierce fighting between November 1914 and the summer of 1917. From here we progressed to the Commonwealth Cemetery at Tyne Cot and the German Cemetery at Langemark. The former is the largest Commonwealth military cemetery in the world. There are the graves of nearly 12,000 soldiers who died in the Battle of Passchenaele in 1917 (Third Battle of Ypres). Two German concrete pillboxes (Bunkers) are incorporated into the cemetery and the ‘Cross of Sacrifice’ is built directly on top of a third. At this cemetery Bailey Reid (Year 9) was able to lay a wreath on the grave of a family relative which added to the poignancy of our visit (2nd Lieutenant Wilfred Goulden, 2nd Battalion Middlesex Regiment, died 12 February 1918). 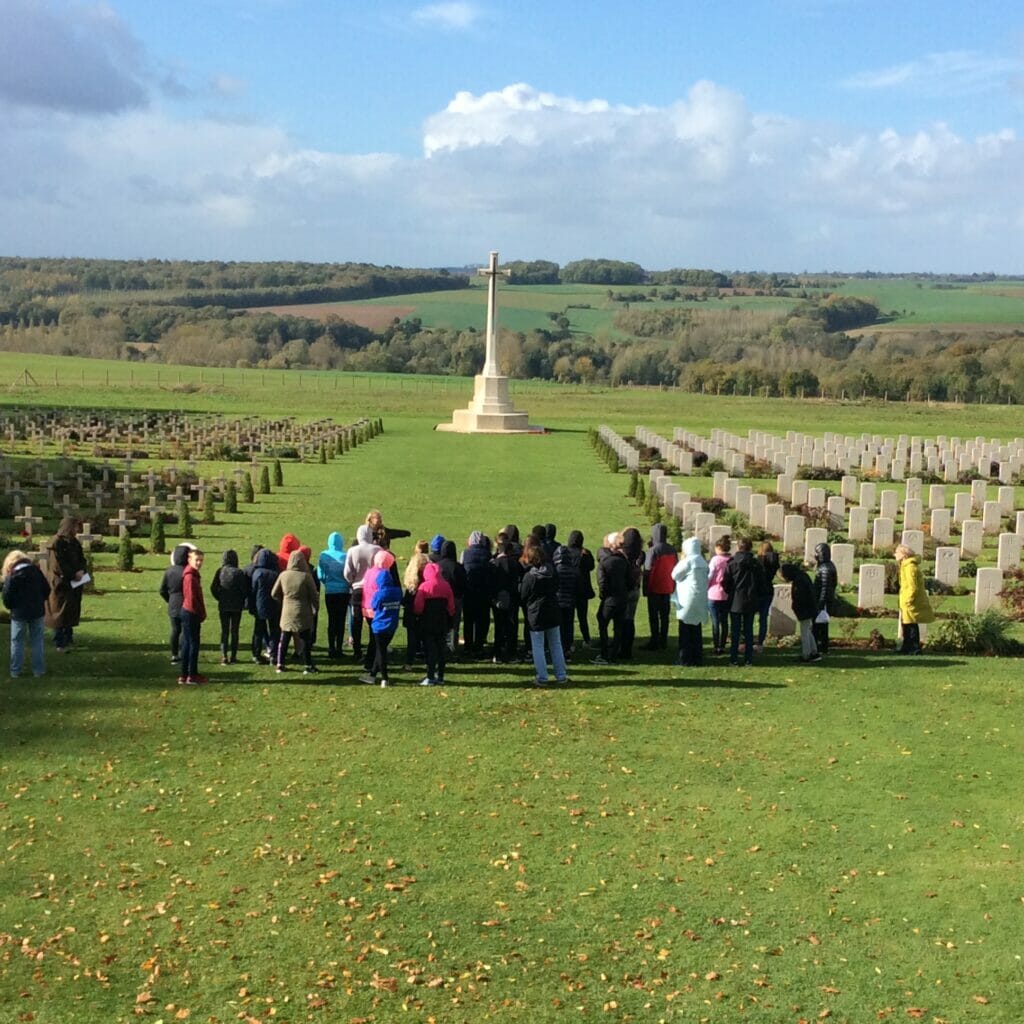 From here we proceeded to the German cemetery at Langemark. It is the only German cemetery on the Ypres Salient and it contains 44,292 burials. The most telling observation we made here was how the graves were marked. Most dramatic was a large headstone which marked the final resting place of 25,000 soldiers.

When we arrived at our lodgings for the evening there was time only for a meal before returning to Ypres. The ‘Last Post Ceremony’ at the Menin Gate at 8.00pm has been a nightly occurrence since 1928. This salute to the fallen warrior is played out in memory of the soldiers of the then British Empire and Allied Forces who fell in the Ypres Salient in World War One. The monument lists the names of 54,896 soldiers who have no known grave. There are Old Rossallian names on this monument and to be able to lay a wreath as representatives of the School was both an honour and profoundly moving (Wreath laying party was Mr M Holder-Williams, Kate Rattray (Year 9) and Bailey Reid (Year 9). There were about 2,000 people in attendance at this service.

The following day we departed the Ypres Lodge and headed out of Belgium towards northern France. Our first visit was to Vimy Memorial Park. The battle here is particularly important for Canadians where approximately 30,000 of them fought at a cost of around 11,000 casualties. The Battle of Vimy Ridge (9-12 April 1917) was a victory and today the Canadian National Vimy Memorial sits atop what was known as Hill 145, rising above the now quiet countryside (the Douai Plain). The monument is inscribed with the names of 11,285 Canadian soldiers who are listed as ‘missing, presumed dead’ in France. It is an impressive monument worthy of the sacrifice made by the men who gave their lives. 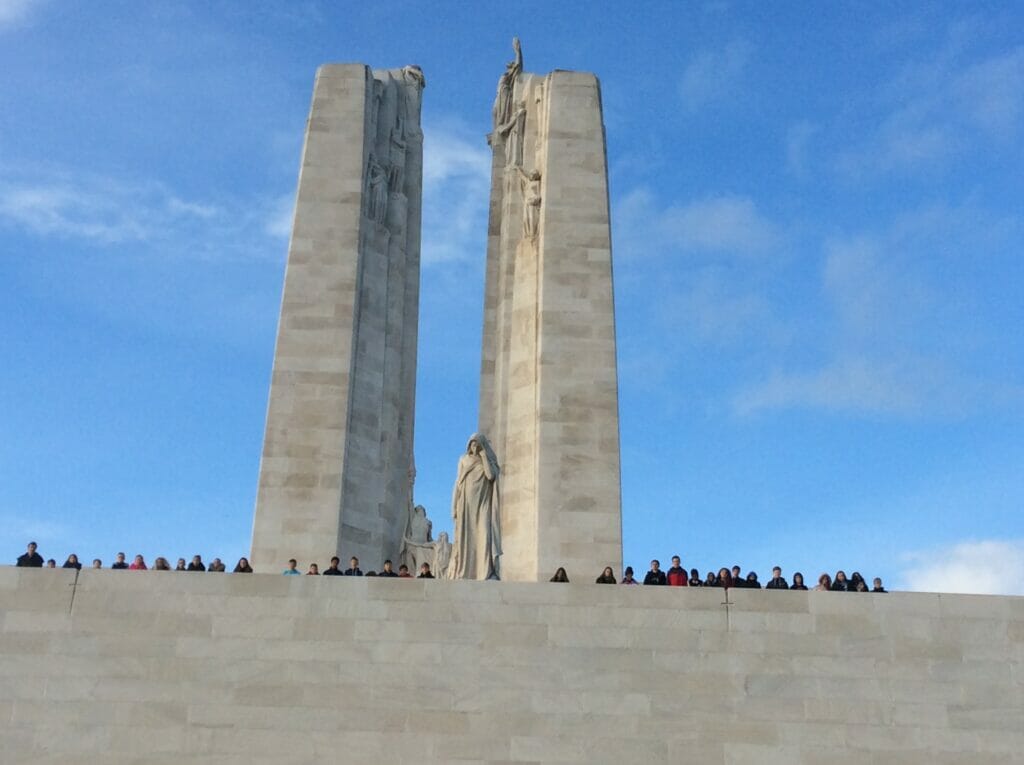 We then pressed on deeper into the Somme towards the town of Albert. Here we meet our guide for the day, Miriam. She was an Australian who had made France her home for many years. She enthusiastically provided us with a full contextual background for all the sites we visited. Principally, these were the Newfoundland Memorial Park, Thiepval Memorial and the Lochnagar Crater, but we did stop briefly at a number of cemeteries in the area. One of these was German and another was specifically to allow Isaac Wiggans (Year 9) to lay a wreath on the grave of one of his family relatives (Sapper Henry Wilcock, Royal Engineers who died on the 21 March 1918). This took place at Bancourt Cemetery.

The Newfoundland Beaumont Hamel Memorial was another very moving experience. Its ground represents the largest area of the Somme battlefield that has been preserved. Trenches and shell holes were clear to see. The site encompasses the area over which the Newfoundland battalion (as well as several British battalions) attacked on that fateful day (1 July 1916), as well as part of the German front line system. The First battalion of the Newfoundland Regiment took 684 casualties (70% of its strength). The centre piece of the site is the Caribou, the symbol of the Regiment, and the memorial to those Newfoundlanders who served in the Great War and to those who are missing without a known grave. The remains of many men, never recovered, still lay in the ground that we walked by…..a deeply sobering thought.

From this location we boarded our coach and moved on to the Thiepval Memorial. This is the largest British War memorial in the world and it commemorates more than 72,000 British and South African men who have no known grave. This ‘Memorial to the Missing’ was designed by Sir Edwin Lutyens for those who died in the Somme sector before the 20 March 1918. Here, we also took the opportunity to lay a wreath in remembrance of the 298 Old Rossallians who gave their lives in the service of their country during this conflagration. (Wreath laying party was Eleanor Kozakiewicz (Year 10), John Cooper (Year 9), Alice Christy (Year 8), Olivia Holme (Year 8), Ellie Qualter (Year 8) and Jacob Lovell (Year 8).

The Lochnagar Crater was the last site we visited in the Somme area. It is one of the original craters created by the detonation of vast quantities of explosives placed in position by mining under enemy lines. This mine and 16 others were exploded two minutes before the start of the Somme offensive (07.28 on the morning of the 1st July 1916). Many German soldiers in proximity of the explosion were vapourised and many others still lie buried where they died. So the site is, therefore, a mass grave. The crater is 91 metres in diameter and 21metres in depth. It is now the only crater accessible to the public.

The penultimate day of our visit saw us leave the Ibis Hotel in Albert and travel further down what was the Western Front trench line. Our destination was Verdun. This battle was fought between the German and French armies. It was on a colossal scale with huge casualties being sustained on both sides. For the French it was arguably the most significant battle of the Great War. It was symbolic of French fighting spirit and their resolve not to be defeated. These sentiments were made clear to us by Florence, our French guide. Her clear account of the battle and the part played in it by Fort Douaumont was compelling. The remains of the fort were surprisingly well preserved. We also surveyed the destroyed village of Fleury. It was not safe to rebuild it after the war because of unexploded ordinance in the area. It is now a forested area.

Perhaps the most harrowing memory of this trip was the visit to the Ossuary at Douaumont. Quite literally it translates as the Douaumont Boneyard. A building representing a hilt of a sword has been built to house the unidentified collected remains (bones) of 130,000 unknown soldiers from both sides of the conflict. These bones are to be viewed through strategically placed windows. What constitutes the handle of the sword is called the ‘Lantern of the Dead’. Inside the building were further monuments and alcoves representing areas in the surrounding region where the remains were found. Names were carved into the stonework. There was also a Chapel of Remembrance.

Having covered a considerable amount of ground travelling through Belgium and France we now set off towards Paris. Up to this point our attention was firmly focused on the horrors of human conflict. We now aimed to change the mood. To this end, we set course for the fantasy world of Disneyland Paris. A goodly collection of DVDs kept everyone entertained as we sped through the French countryside. The sing-a-long version of Mamma Mia went down particularly well, even with our excellent coach driver (Steve) who was with us throughout the trip. Our overnight stay was in the Magic Circus Hotel and we ensured that we were at the gates of Disneyland Paris in good time to make the most of the day. Needless to say, a grand time was had by all….!

We departed the Magic Circus Hotel on schedule and proceeded to Calais to catch the 23.35 ferry to Dover. This part of the journey was uneventful and of relatively short duration as we docked and disembarked in Dover by 01.00. From there the final coach journey to Rossall was deafeningly silent. There was not a sound as everybody managed to sleep in seats that do not actively encourage that human necessity. We were enthusiastically received by relieved Mums and Dads as we arrived, on time, at Rossall School drop off point on Wednesday 25 October.

My thanks to all those who travelled to Belgium and France (Common Room and pupils) and trust that the experience was both thought provoking and, on reflection, rewarding.