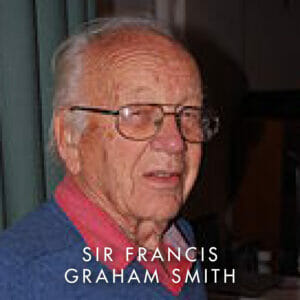 Sir Francis Graham Smith (F 40-41) is a British astronomer. He was the thirteenth Astronomer Royal from 1982 to 1990. On leaving Rossall, Sir Francis attended Downing College, Cambridge. He then went on to work at the University of Cambridge on the Long Michelson Interferometer.He received his PhD in 1952, after spending most of World War II working at the Telecommunications Research Establishment at Malvern, where he gained experience in radar research techniques that later proved invaluable in his career. He was President of the Royal Astronomical Society from 1975 to 1977 and was appointed Director of the Royal Greenwich Observatory in 1976. He was Director of the Nuffield Radio Astronomy Laboratories at Jodrell Bank from 1981 to 1988 and Secretary and Vice-President of the Royal Society from 1988 to 1994.