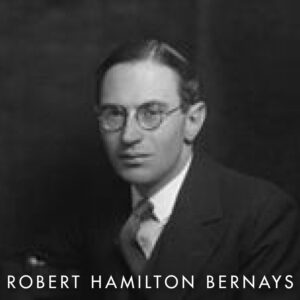 Robert Bernays came to Rossall as a scholar in 1916 and went on to study at Oxford in 1920. Politics had always been Robert’s aim in life and he spent much time out of work supporting the Liberal Party at its great effort at revival between 1919 and 1933. He was elected to Parliament as the Liberal member for North Bristol in 1931, a constituency which he held until his death. In 1937 he was appointed to the Commission on East African Education and in the same year became Parliamentary Secretary to the Ministry of Health. He then took up duties as Assistant Regional Commissioner for the West. In 1942, his military career commenced when he was commissioned to the Royal Engineers. During a trip to the Italian front with a group of MPs in 1945, his flight came down and all those on board were killed. He was 42.

His affection for Rossall was deep and lasting, and in the years before the war he did much to help the School. As a member of Council, Robert was instrumental in the School moving to Naworth Castle in 1939 after it was requisitioned for use by the Ministry of Pensions as part of the war effort.