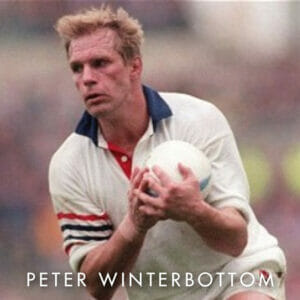 Peter Winterbottom was an England Rugby Union footballer who played as an openside flanker . He was England’s most capped openside (with 58 caps) until 2003. He made his England debut on 2 January 1982 against Australia, and his final appearance on 20 March 1993 against Ireland.

At Rossall, Peter worked his way up the teams until he eventually captained the first XV in 1977/8, still regarded as one of Rossall’s most successful years in both sporting and academic achievements. His spirit, commitment and pride were excellent, both on and off the field.

He was the second England player to reach 50 caps, after Rory Underwood, and was added to the ‘Twickenham Wall of Fame’ in November 2005.