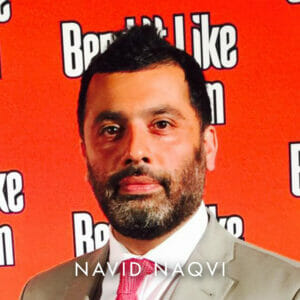 Navid Naqvi (MF 86-95) is currently starring in the West End production of Bend it Like Beckham.

Irvine is playing the role of Teetu’s dad and also covers the lead role of Mr Bharma. The musical is loosely based on the 2002 film of the same name and has received five star reviews from the national media.

After leaving Rossall, Navid moved to London and completed a degree in Drama, Film and Television at Brunel University. He then secured a place at the prestigious Royal Academy of Music, studying Singing in Musical Theatre.

In 2002, Navid was offered a role in Andrew Lloyd Webber’s original cast of Bombay Dreams in the West End where he played the part of Cricketer and covered the lead role of Madan. In addition, Navid has played roles in Doctors, Eastenders, Casualty and featured as a main character on The Bill. In 2011, Navid worked with David Walliams on David Walliams Live in the West End and created the role of Raj which was a reoccurring character in David Walliams books. Navid then took time out of the arts and studied a postgraduate in Law at BBP Law school, before completing a Masters in Business (MBA) at Westminster Business School. Navid worked with several healthcare and charity groups which include Elephants on Parade Between 2012 and 2014, Film director Gurinder Chadha (Bend it like Beckham, Pride and Prejudice) was so impressed with Navid, she offered him to take part in several musical workshops of Bend it like Beckham.