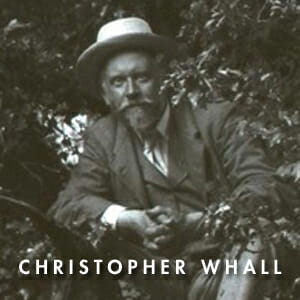 Christopher Whall was an English stained glass artist, widely recognised as one of the key figures in the modern history of stained glass.

On leaving Rossall, he enrolled at the Royal Academy Schools, before spending almost 3 years in Italy studying architecture and painting. When he returned to London in 1879, he worked as an illustrator of newspapers, novels and children’s books, as well as assisting other painters and giving drawing lessons.

His career as an independent designer and maker of stained glass began in the late 1880s. This coincided with the emergence of the Arts and Crafts Movement through bodies such as the Art Workers’ Guild and the Arts and Crafts Exhibition Society, in both of which he was active. In 1887, he converted the cow-shed at his cottage in Dorking into a workshop, where he set about learning all the processes of the craft: cutting, painting, firing and glazing, so that, in future, no part of the making of his windows would be beyond his control.

Christopher was also influential as a teacher, running stained glass classes at the Central School of Arts and Crafts and at the Royal College of Art in London, where students were encouraged to relate design to architecture. He was elected to the Art Workers Guild in 1889 and served as Master in 1912. His pupils and colleagues included his daughter, Veronica Whall. Christopher died on 23rd December 1924.